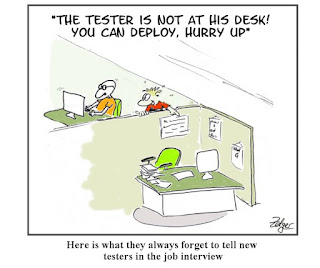 This is a rework of a cartoon I drew in December 2006 based on a story that happened almost exactly like the cartoon demonstrates. I was "CC"-ied an Email which the head developer at that time answered to Engineering team. He forced them to deploy a piece of code while bypassing all agreed software deployment processes. And it wasn't the only time we suffered such actions. The original version of the cartoon together with one of my first contributions as an author was published later by BZMedia, N.Y. (New York)

T.J.
It all started with a Commodore C128 with which I developed a simple ordering software that I used at my first company, a wholesaler of sports goods. It was no rocket science, but it was the trigger for me to slip into the IT Business right after I came back from Swiss Military. I never left IT business since. I scripted DCL (VAX/VMS), REXX (IBM) at a big pharmaceutical company, then studied Computer Science at ISBE (Bern, Switzerland), graduated with BSc and became a C++ software developer while working for a big and well known Swiss banking company. After a short sniff into the consulting world, I discovered a fascinating world of testing and test automation. It started with Rational Robot, then I switched to using InCisif (a Canadian solution), SOAPUI and Selenium/C#. Besides work, I am drawing cartoons about software testing. Some of the cartoons had been published in US magazines but I never made a business of it. I am not spending too much time making a cartoon look perfect. I did not study arts or anything similar. I have a job as a quality manager and technical test analyst. This is where inspiration mainly comes from. Have fun!