Lining up in the Ocean 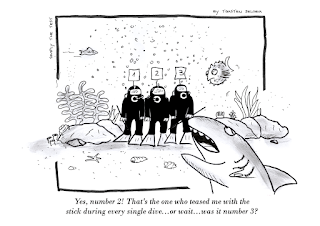 It's about how fast we can be wrong with our conclusions. I often see that we detect an alledged new issue, not realizing that the same anomaly was already there before. It's easier and faster to judge without collecting the facts first. Things that may look the same, sometimes aren't.
Posted by T.J. at Thursday, November 29, 2018 No comments: 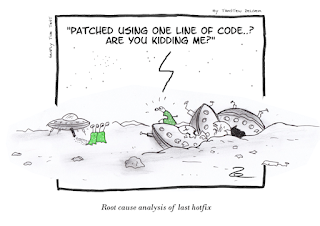 When developers state, they didn't change anything but one line of code, they actually believe that themselves. It's just that they have a bias towards forgetting all the work they've done (plus their colleagues') before their last coffee break.
Posted by T.J. at Monday, November 26, 2018 No comments: 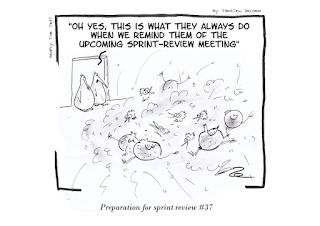 An agile team is one that continually focuses on doing its best work and delivering the best possible product. In our experience, this involves a ton of discipline, learning, time, experiementation, and working together.
[Crispin - Agile Testing]
Posted by T.J. at Tuesday, November 13, 2018 No comments: 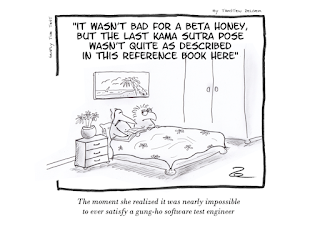 Last Friday, in the "daily", Cindy handed over a draft of her own doodled sketch about me. I was really surprised and found it brilliant. I promised her to put the sketch into my style cartoon over the weekend and here we go.

ThanX. I never met someone who made a drawing about me. I really enjoyed having this moment of conducting a little self-mockery.

And this is the original sketch from Cindy: 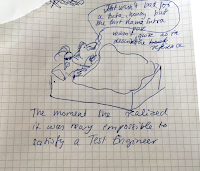 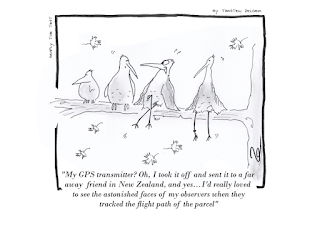 We are tracking the routes of animals all over the world. Some birds have already become famous like Lenny the stork whose annual airtrip to Spain and back to his home at Basel Zoo is observed by over 1500 fans. Lenny has a transmitter and everyone can check online when he starts his journey from Switzerland to South Spain where he spends a few months before he returns.

His routes [lenny] are recorded since 2013 and each time he starts his way back to Basel, the local news are celebrating it with corresponding articles [lenny2]. People are desperately awaiting his arrival near February/March and are fascinated by the fact he returns to the same nest every year. He also meets the same old girlfriend to enlarge his family. What a faithful and diligent bro.

I wonder what Lenny thought of us bird-stalkers if he knew that each day of his life is tracked as a spot on a map that many people find so exciting. He'd probably bring us to court, took off the transmitter or at least got himself unsubscribed from all social media accounts.

Maybe he'd become more vain and demonstrate that he could fly further south to Africa like others and/or his antecessor did. He'd probably also felt ashamed when we watch him stop at all these fastfood rest places which are nothing else but garbage dumps. Or, he could be a little rascal like in the cartoon - with a big portion of humour. But since he doesn't know he's getting observed, he blithely goes on doing what many others do until a yet unknown trigger in his head tells him to go back home. 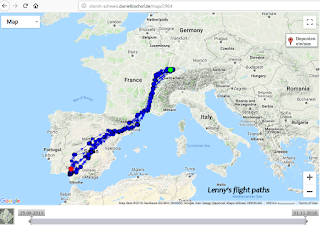 It's is not only the incredible flight-paths that I find so fascinating, it is also sad and heartrending if you see that almost every second of the ringed storks do not survive. The datalogger web page [logger] keeps a record of each stork with his/her name and if you read their fates, you will learn that some don't even manage to accomplish a single trip. They die by flying into electric power lines, wind wheels, get shot or perish because they ate wrong or morbit things. These are all causes of death which are not natural.

But that's not really what I was about to talk. While digging deeper into Lenny's flight routes, I got a lot of questions. Why do these storks no longer fly to Africa and instead stay in Spain? How do they know where to go and how do they find their way back to their original nest they grew up? When do they start going South and how do they know it's time to go back?

Scientists have raised the same questions about the truncated routes and they have come up with two theories. The first one is the fact that Swiss storks are the result of a resettlement project that started with Algerian storks, a species that is not used to fly the same long distances as the original domestic storks.

The route they are taking now pretty much matches the distance to what their relatives are "programmed for" or what they can perform. The second theory is less pleasant. Spain is full of garbage dumps where they find enough food. If you follow the markers of Lenny and then switch from the "map"-view to "satellite"-view, it is really appaling to see where he likes to rest and eat. I feel sorry for him and his friends. These garbage dumps seem to be another reason why there is no need to search for food further south.

These are fair explanations and I can live with those very well. But I could not find any clear answer to all my other questions like how do they remember which route to take and when? Explanations in scientific articles range from "inner-clock", "genetically programmed to go South with no plan" to "orientiation by the Sun", "stars" and even "magnetic fields" or "orientiation by the landscape".

I am a software tester and if I am given similar amounts of illustrations from a software developer whose pieces of sofware don't work, then my conclusion normally is that one simply doesn't know. 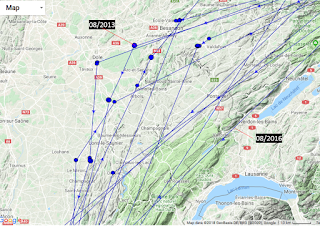 I took the time and verified just one of many theories, which is "orientation by the landscape".
If you zoom out then it looks like Lenny takes the exact same route every year. But if you zoom into Lenny's flight path, I see that his first 2 routes to Spain went over the region of Burgundy in France while the last 2 years he took a route which was 100 km East of the first routes. This doesn't really look to me as if he strongly remembers each hill and course of a river but it still looks like he follows a main path from which he takes small excursions. 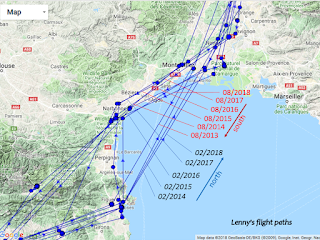 When Lenny headed South the very first time, he took a shortcut over the Mediterranean Sea (08/2013); a route which he never took again in the subsequet years on his way South. But he used it regularly on his way back north except for 2016 and 2017. That's interesting, 'cause big birds generally don't like to fly over the sea. They have less natural draft. It costs them more energy to fly. So, what happened the first time that he never took that route again? And why did he find that route more attractive for his return to Switzerland? Did he follow and  trust less experienced storks? Probably not, because at the time he got "chipped" he was already an experienced 10 year old stork. May weather conditions or seasonable winds play a role which make it more economically to fly over the Sea at some time of the year? Did he learn about dangerous places which he tried to avoid next time? Is this aberration from the main route broadening his skills and make him a real travel expert over time by learning on the fly and really remember all these things? 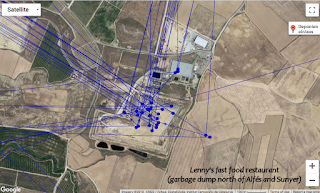 Now we have our link to software testing. Isn't there an analogy to the process of following a strict testscript vs. taking some detours? Isn't it more successful to find bugs by making some extra tours from your documented test steps? What if we don't enter the prescribed number 9481 in the calculator but do something different and watch what happens next? What if we use an alternative way to trigger the same software function/operation? I can enter a text by typing or by pasting from the clipboard into an edit field and I swear to you it is not the same! Isn't this habit of taking detours exactly what turns an ordinary amateur "checker" into a professional software tester?

As a software tester you have to activate all your senses and over time you get a much better feeling where things can go wrong. No book can teach you that. There are interesting ones out there like those from James Whittaker but it's nothing like experiencing these tours on your own [whit]. And what about subject matter experts? They are like the elder storks. You would be dumb not to take their advice. They may not be the best testers, but they might lead you to very interesting places you had never been before. 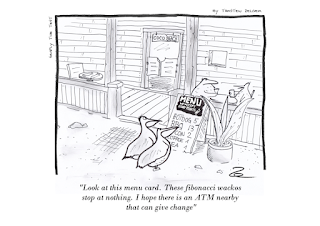 Consider you asking a waiter how long it takes to deliver the meal and all he says is: "Can't tell you that, but I can tell you how complex it is to prepare". That's what story points are about. I already wrote about story points in the last post but copied a snippet to this cartoon.

Although story points have nothing to do with scrum (invented by Mountain Goat Software), many companies use these to estimate their tasks. Story Points are a bit special because they don't tell you anything about how long a task takes, but rather how complex a task may be to complete. In theory, a task can be very trivial and still take longer because it may invole a lot of monotonous activity to complete the task. On the other hand, a complex task can be completed within an hour or day depending on the skill of the one who is implementing it.

Although I have worked with Story Points for the past 10 years, I am still swinging between two different mindsets. I still can't decide if it is a cool tool or just a buzzword. The paradox of this measurement is the fact that on one hand you don't measure how long you have for a task, but you still do it indirectly because you take these SP numbers to fill the sprint. This is per se exactly the same as if I measured the hours I have for a task, because we fill the sprint only with a limited number of hours/days available. But, story points help you understand much faster when a task gets too complex. Since you are using fibonacci numbers, you get alerted right away if you have a task estimated higher than 8. There is no 9, no 10, the next number is 13. This huge jump is a great warning sign and leads you to rethink the size of the story.
Posted by T.J. at Thursday, November 01, 2018 No comments: