Recently in the server room 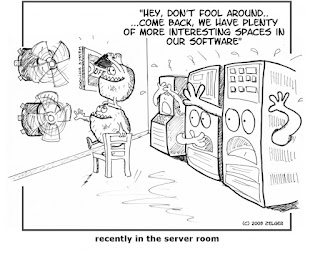 Last night technicians performed some maintenance work on the air conditioning system in the computer centre and didnt tell anyone. They could not finish their work in time and left the server room with no cooling at all.
First room temparature SMS-warning received early in the morning (30 degrees C), then the second warning moments later, now 40 degrees, but of course none was reachable at that time. The servers shut down automatically when they "feel" it is getting too hot, but for 3 of the servers this was their last activity..., so this cartoon is dedicated to those 3 lonely servers who sweat to death...=;O)
Posted by T.J. at Wednesday, August 13, 2008 No comments:

Cern about to create black holes 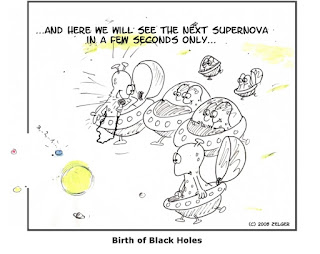 According to a news entry by CNN about a month ago, the most powerful atom-smasher ever built could make some bizarre discoveries, such as invisible matter or extra dimensions in space, after it is switched on in August.This collider, called the largest scientific experiment in history, is expected to begin test runs in August. at CERN in Switzerland. Some critics fear the Large Hadron Collider could exceed physicists' wildest conjectures: Will it spawn a black hole that could swallow Earth? Or spit out particles that could turn the planet into a hot dead clump?
David Francis, a physicist on the collider's huge ATLAS particle detector, smiled when asked whether he worried about black holes and hypothetical killer particles known as strangelets. "If I thought that this was going to happen, I would be well away from here," he said.
The collider basically consists of a ring of supercooled magnets 17 miles in circumference attached to huge barrel-shaped detectors. The ring, which straddles the French and Swiss border, is buried 330 feet underground.
Posted by T.J. at Sunday, August 03, 2008 1 comment: 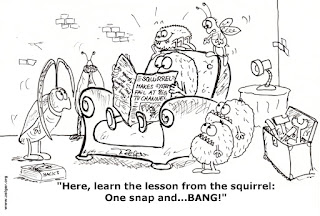 These bugs are envious, they heard a squirrel managed to down the Swiss TV channel for at least an hour.
Posted by T.J. at Sunday, August 03, 2008 No comments: