How developers see their code 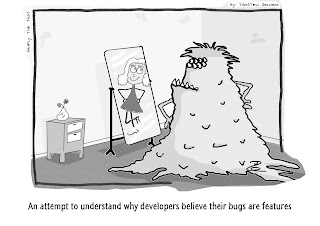 The idea of this cartoon was born after a conversation with a developer who didn't intend to clarify whether a certain piece of code was working as expected.
The developer stated: "by looking at the code, I know that it works".
Actually, he wasn't at fault, but it was kind of amusing for me to see how different developers think compared to software testers.

I don't believe in code-snippets that I see on a piece of paper or checked-into some source code management system. I want to see this thing run, fly and rock before I make a statement that I like what I have seen. Besides, it also reminded me to another developer statement I've accidentally witnessed many many years ago and I will never forget that phrase which was: "I haven't tested it, but the implementation looks great".

To be honest, I can't tell here whether the developer said that to himself to blow his own horn or whether he was talking to another developer to compliment on his work.

However, after all these years being involved in many testing projects and having developed software myself long time ago, I have always marveled developers' ability of innocent look at their code like they constructed a beauty, only to learn a little later from a critical thinker that either half of it is missing or not working as intended. When I was developing software my own, I was always uncertain whether I did the right thing and I asked the customer several times, if this is really how this thing should work. But that was 20 years ago and we didn't have any testers at that time who served as a protective barrier between development team and customer. The customer was coming to us - developers - every six weeks to tell us where we were wrong. We faced these customers directly. Maybe that made a difference.