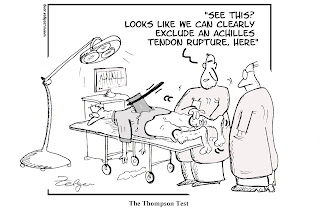 I was impressed, because it took the doctor only seconds to make a clear statement without even asking me questions about where I feel any pain. Later, the magnetic resonance imaging procedure (MRI) confirmed the doctors' diagnosis. When I later googled the web, I learnt, the doctor executed the so called "Thompson Test".

Now, let's try to bring this experience into context with Software Testing. Of course, otherwise I wouldn’t have mentioned it in my blog. In contrary to the doctors, we testers usually look for bugs and not necessarily how to solve an existing problem. This is more typically the job of a software developer, although we testers also try to help as much as possible in finding some indication for the root cause of the problem (btw, works only if managers don't measure a tester's throughput by counting the number of bugs found...).

We use test techniques that are effective in one area and probably less effective in another. One such technique I use often for documenting software bugs, is the classification according to Kepner-Tregoe. By answering a set of simple questions you may either find the solution to the problem on your own (actually the main goal of this technique) or, if not, you provide at least some valuable set of information to the developer. This makes it much easier for him to localize the issue and become more efficient in solving it. If you want to learn more about Kepner-Tragoe, go ahead, GIYBF.

Additional we use logging tools (actually we have several ones), where we can grab the exact exception message; something that is typically NOT shown to a user because it might frighten him, but it is important for the testers and supporters to have access to, so the developer does not need to spend too much time investigating and trying to reproduce the issue.

TOJZ...still suffering the aftermath of my sporting injury for quite a while...
Posted by T.J. at Thursday, August 30, 2012 2 comments: