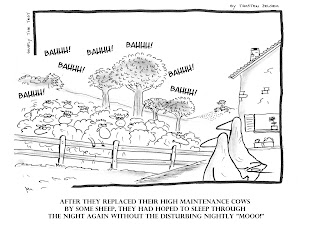 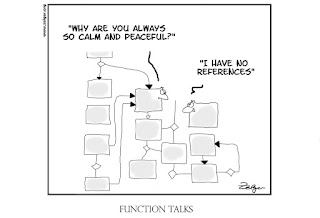 The truth about agile development and scrum 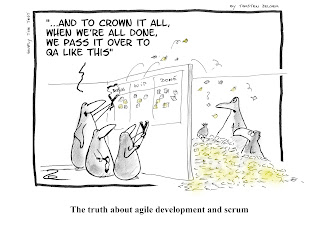 James Whittaker in his book "Exploratory Software Testing" (page 148) stated: "As testers, we must simply get the most work done that we can in the amount of time allotted to us".

Unfortunately, it's very popular to squeeze testing time when deadlines are near.

Years after I drew this cartoon, I worked in a project where we regularly had a burndown chart that looked liked the one below.
Hardly anything was delivered to testers until shortly before the sprint ended. We were thrown a huge bunch of completed tasks over the wall.

You might guess what happened next. Some testers felt the deadline pressure, too, hence probably didn't really accurate testing anymore and simply closed the tasks after a very quick and dirty smoke test (if at all); and all this just just to look great in front of the PM or to however one had to present the results. That's what obviously happened here. Dare those who work with testers who give a shit on deadlines and simply send back for rework all your half-baked features. 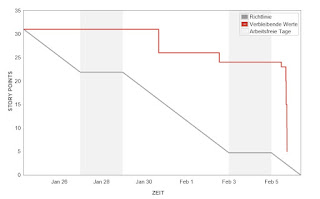 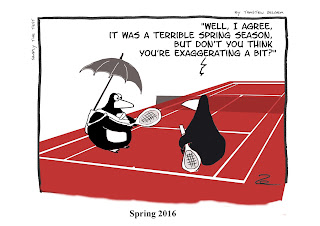 I have to apologize. This is the second cartoon in sequence without a direct relationship to my daily work as QA manager. Actually, there is a relationship, but it is not so obvious. I promise, the next cartoon will be again more focusing to IT again.
Posted by T.J. at Saturday, May 28, 2016 No comments: 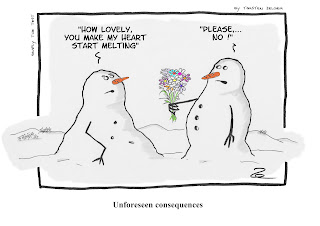 Testing the Count Down

We had this announcement where the big boss stated that he would give us 90 days to change. OK, but change what? No satisfying answer was given to us when we asked what exactly they wanted us to change. So we continued doing our jobs as professional as always and I can tell you, we all worked very hard for the success of the company and to make our customers happy. Some of us even got a daily email with a reminder saying "80 days left", "79 days left"...etc. After the 90 days were expired, nothing happened. At least, we didn't notice anything and the emails had stopped.

I have no idea what was the original purpose of this announcement and the following up emails and I doubt that professinoal engineers can be impressed by such statements. Anyhow, this story inspired me for the cartoon, but if you are a software developer or test engineer then you probably draw a relation to a typical situation in software development.

A funny fact in programming is that arrays start at index 0 and not 1 for many popular programming languages (eg. C++,C#, Java, Perl, JavaScript) and the last position in the array is indexed as Array-length minus 1. This fact sometimes causes troubles and confusion and it isn't a rare scenario where developers introduce bugs because of that.

Consider the following piece of code which would cause the program to skip the first element of a list. It starts reading at position 1 (which is actually the second) instead of 0. 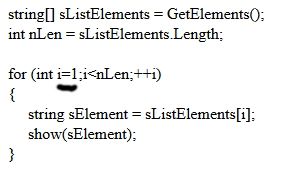 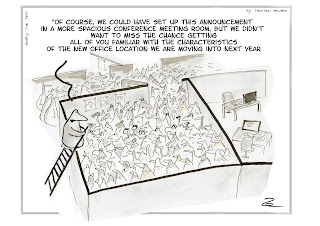 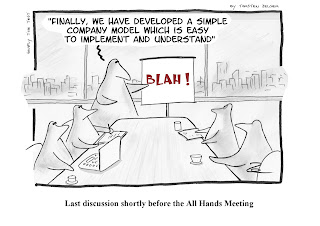 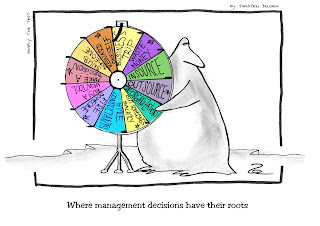 As simple as LEGO 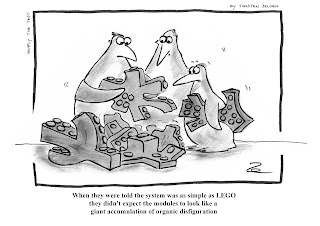 Bugs at the bar 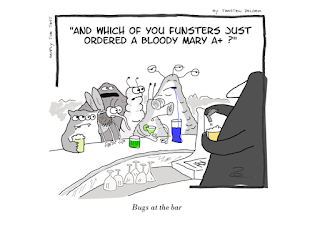 I must admit, the cartoon is still in kind of a draft mode, since you still see the outline of the pencil.., I will correct that later.
Posted by T.J. at Sunday, January 17, 2016 No comments:

After Lunch Atop a Skyscraper 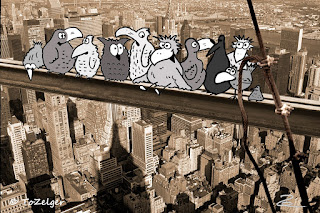 The original picture showing construction workers sitting at lunch at the RCA building was created in September 29, 1932. Many parodies exist and here is yet another one, 84 years later, although I must add that this photo here was shot by myself from the Empire State Building in 1997. You can see its shadow. The birds were drawn at Sylvester 2015/2016 and the only "stolen" part here is the structural steel work and the cable on the right.
And what does this have to do with TESTING? Nothing, but these 11 testers mark my QA team spread all over the world, and although they are sitting high above ground, they've got wings and I hope they use them to overcome all following challenges and ups and downs we may face in this new year 2016.
Posted by T.J. at Friday, January 01, 2016 No comments: