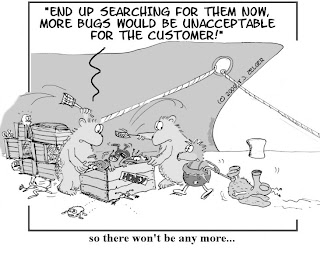 "Knowing about more problems would make it more difficult for the customer to accept the release..."

This is what a product owner told me and he kindly asked me stop testing any further. He was worried I could detect even more issues. 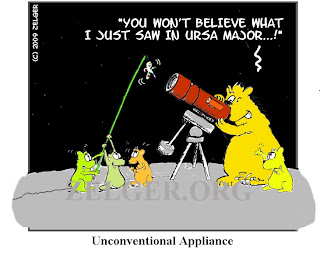 For those who didn't recognize what's hanging at the other end of the bar...it's a buiscuit, the shape of a bear (ursa).

Quite a year back I tried out some java script injecting by typing simple javascript commands directly in to messages that was part of the communication structure between fat clients and an online application-under-test. Whenever someone queried the list of items stored in the database, that piece of script was executed. The implication was a simple message saying "hello".

Users found it funny, some experts already knew it will become an issue sooner or later if javascript can be injected into one of the most important interfaces, but priorities were elsewhere. So, nothing happened for quite a while.
I decided to make it a little bit more obvious of what can happen and copied and edited the login page of our web portal, then published it on my own webserver outside the company. Then I injected the message by a javascript URL redirection to my webserver. The implication now was that users who queried the items in the list, got re-directed automatically to my "fake" logon page that looked exactly like the one from the company. Users who felt into this harmless phishing attack for a moment shrug their shoulders and then re-typed username and password into my logon page, not knowing that the POST request this time does something else, for instance storing their usernames and passwords. Real security experts laugh at this primitive phishing attack but I was shocked how easy that works. Amazingly although many testers and other users who were navigating on our test environment realized that something is wrong but none noticed the significance, or let's say the priority to fix this issue.

After quite another while I decided to make it again a little bit more obvious.. .I replaced the script instruction by an img-tag, hereby linking to a picture I found somewhere else in the web. Any person who logged on to the system and queried the database still received the queried list row-by-row, but one row now contained a hugh picture showing a crying ape with his mouth wide open.
This was in a list-column where only text was usually expected for display. Believe it or not, it didn't take long after that, until injection of such script tags was finally filtered. But it took more than a year until that issue was fixed.
Posted by T.J. at Monday, March 09, 2009 1 comment: