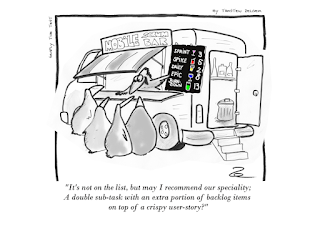 A tongue-in-cheek explanation of scrum with a pinch of salt.

Refinement: in a Refinement Meeting, the business analysts introduce the desired features (= user stories), and the developers estimate how complex these are to implement. If you are lucky, you deal with an experienced team and the estimation of each story is a matter of minutes. At the worst case the estimation is based on limited background information or even total disorientation on what is really behind these stories.
Weird thing is that some companies prefer the term "Grooming" over "Refinement" although I recommend not to use it. Grooming is another word for child abuse...just be aware of that.

Daily: In a "Daily", the entire team meets for a 15-minute briefing. Each individual has a minute or two (depending on the team size) to explain what you have done yesterday and what you are planning to do today. For people who are not familiar with this kind of briefing (especially when they are new to agile processes), such meetings can be mis-understood as an awkward instrument of micromanagement. As a result, during the briefing they try to convice others how hard they worked and that they will work even harder today.
Others are so enthusiastic and would like to have the complete 15 minutes just for themselves. As a result, one hardly finishes in time. Some of the team-mates have no clue what others are talking about, others polish their nails or check the latest news on their mobile phones or make notes for the next meeting where they will do the same for yet another meeting. From a good friend I heard their team had to do planks while they were speaking. This helped guarantee they didn't talk too much. An external consultant once suggested to snap off the meeting after 15 minutes regardless whether all team-mates had a chance to talk. I think such advice is ridiculous and counterproductive in regards to building up a motivated team.

And the winner is...
Last but not least, as a test manager who has to keep an overview of what is going on in more than just one development team, visiting all the daylies of the teams was one of the best places to get a rough impression on what all teams are working on. I've learnt this way also what the DevOps team was doing could therefore be alerted if they were working on stuff that may have had an impact on QA.In the past...where I was working just for one team and it was much harder to get informed what other team-mates were doing.

I am not a robot 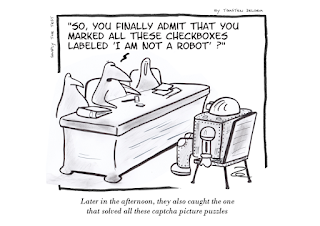 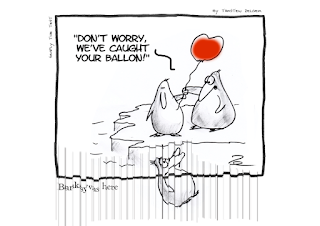 Sotheby's in London has auctioned off a framed version of Banksy's iconographic subject "Girl With Balloon" for over 1 million pounds.When the final bid was made, the big surprise came. Suddenly the screen moved down and the picture was destroyed by a shredder built into the picture frame [nyt]. Right after the surprise, the anonymous artist had published a video detailing how he installed a shredder into the frame [ban].

The disturbing part of this story is that this picture has probably gained even more fame through this action and thus very likely becomes more coveted although shred in pieces; volitional or not, Sotheby's to be in the known or not, the buyer well-informed or not....who knows.

[ban]
https://www.instagram.com/p/BomXijJhArX/?utm_source=ig_embed&utm_campaign=embed_video_watch_again
Posted by T.J. at Monday, October 08, 2018 No comments: 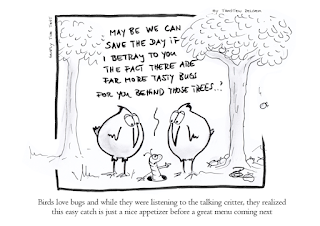 As is with these numbers, they are important, but they serve only as a basis for further investigation. It's too tempting to use these numbers as is and then draw one's one conclusions without questioning the numbers.
Posted by T.J. at Saturday, October 06, 2018 No comments: