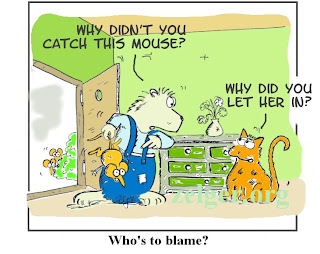 Sooner or later, either you or your team will be faced with the question, ..."How come that the testers haven't found this bug?" One thing is for sure:

Testers don't create bugs, those are implemented by the developers!

So, the question should rather be:

I cannot think of a single defect where our testers don't ask themselves the question "How could I have avoided this bug to go un-detected" and then update their testware accordingly. But the number of test cases grows with the features while the number of testers is often a constant. What's left are priorities and supernatural smell for defect-finding...sometimes it just doesn't come up to everyone's expectations.
Posted by T.J. at Monday, February 23, 2009 No comments: 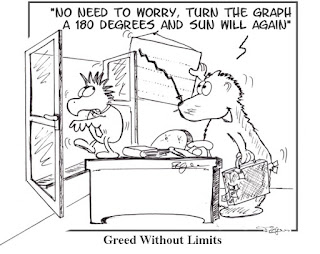 Inspiration for this cartoon came from an article by Daniel Binswanger, found in "DAS MAGAZIN", issued by the Basler Zeitung as of February 7, 2009):

It is already the second cartoon on the topic of the financial crisis, but if you carry the thought a bit further, you might find some similarities in the business I am working in.
Posted by T.J. at Sunday, February 08, 2009 No comments: