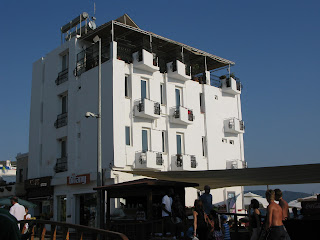 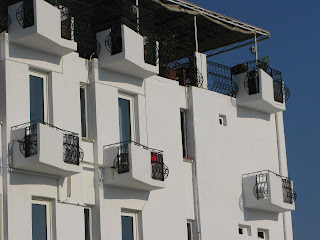 Please excuse my short excursion away from my traditional cartoons about software testing. But this one is worth looking at, since it is related to testing indirectly.

My family and me just came back from a superb holiday trip at Greece Island Kos. We also made a short trip to Bodrum, Turkey. While we were eating traditional Kebap there, I looked at the building vis-a-vis and was wondering about the architecture of  the balconies.

Something was wrong with them but I couldn't immediately figure out what it was. After a while I suddenly realized that the sea-side balcony at the second floor had no French window, meaning, it was unreachable. Then I saw that there was another one with the same "pattern" just below in the first floor. Fine, no doors. But why need a balcony there if you can't reach it? As a tester, my first thought was, it must be a bug, maybe an architectural bug,..no idea, just kidding! Maybe the two balconies where there just to achieve some kind of symmetry.

My theories didn't make sense and so I asked the waiter at our restaurant whether he can tell me more about this special "feature" at the white sea-side building vis-a-vis.

He didn't really see the problem outright and when he finally noticed, he stood on the sidelines for a moment . Then he explained to me what he was assuming. He thought the doors had been closed with masonry because of the strong wind and because of too much sun at this side of the building. Then I noticed him calling one of his colleagues and pointing to the abnormal balcony. Few seconds later a third colleague came by and all together were discussing excitingly the anomaly they/me just detected. After a while, the waiter came back to me and confessed that he'd never noticed this issue before even though he was working  in the restaurant for several years. He and his colleagues, too, were fascinated about the missing doors and the waiter expressed  to me some kind of amazement about how I as a tourist are looking at things.

When he said that, I immediately thought about James Whittaker who in his book "Exploratory Testing" often compares testers with tourists. Usually, tourists look at things differently than than those who live there here all the time. As a tourist you don't take things as granted. You are typically more curious and want to learn more about an area you've never visited before. This different view makes you notice things which people take for granted or don't know or care about. My plan is not to make too many relationships to the testing scene here but  fresh eyes will always find new things, no matter how well you do your job as a software tester. At one point in time it is better to have someone else look at your "baby". If you know the SUT  (software-under-test) too well you start to accept and tolerate things where others would move their eyebrows...This message is also for developers who don't think their code needs testing. =;O)
Posted by T.J. at Saturday, July 23, 2011 3 comments:

Testers meeting at the bar 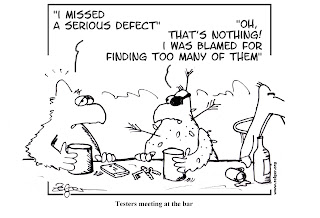 Testing is a thankless job. The tester's job is to tell a developer or a business analyst that "their baby is ugly" and it is difficult to stay friends after that.

If you try to be polite and ignore the ugly baby, it is just a matter of time until the customer faces you with the same conclusion or even worse when he states that ALL your babies are ugly.
Posted by T.J. at Thursday, July 21, 2011 4 comments: