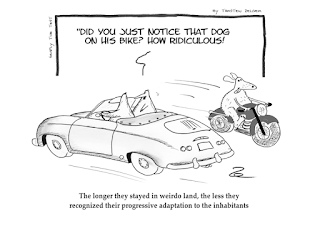 I just wanted to draw an oldtimer Porsche Speedster 356 of the Fifties. Usually I am less addicted to sports cars, but this one is an exception. I watched an interesting report by Jay Leno about a 356 replica bulit by JPS Motorsports and since then can't take my eyes off it. 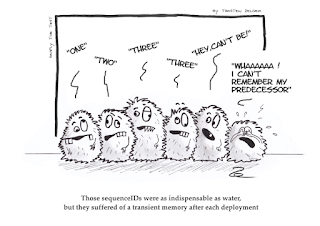 Sorry folks, Insider. I don't know how I can better generalize the cartoon so it is also funny for those who haven't experienced our exciting moments we had with our love-hate relationship-sequence IDs. The counter was reset after each deployment. It resulted in duplicate numbering, hence kept us busy hunting for ghost bugs.
Posted by T.J. at Thursday, May 17, 2018 No comments:

No undo in the elevator 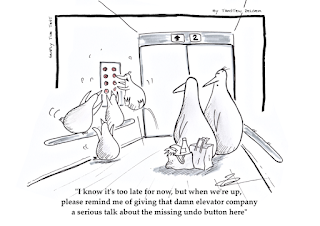 A nice test pattern to apply while testing software, is to revert all changes performed on one object or more, either by sending the keys CTRL-Z as often as possible or by using any other provided cancel/revert/undo operation if it exists. An interesting observation for me still is the fact that until this day, I had never been in an elevator that provided the possibility to cancel your choice on pressed buttons... resulting in the experience of real "pain". Ready to take off - or good enough to go live? 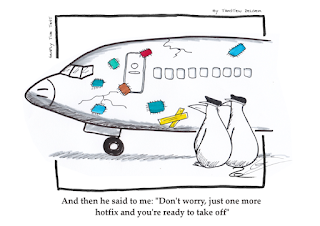 Many, many years back, when I drew the first version of the cartoon on a draft piece of paper, I was inspired by an email sent out to everyone claiming the software is good enough to go live although the software never went through proper testing. Only "A." had tested it; and since A was such a great techie we were feeling quite comfortable if he had looked into it. This attitude had established more and more until we forgot to deliberating on the fact that even for "A." it was simply not possible to deal with all those increasing bugs showing up at customers. We had to change our mindset to simply rely on exploratory testing only, and therefore set-up a team that performed a more planned approach in testing the software. This included a study of all varying characteristics of the different customer's most important workflows, and it resulted on testing these workflows with the goal to mitigate the risk these workflows are broken in the next release.
Posted by T.J. at Sunday, May 13, 2018 No comments:

A lesson in Test Patterns 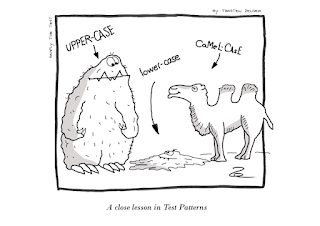 I recently had a workshop at the SwissQ offices in Zurich about common test patterns and how I am looking for bugs. I showed a draft of this cartoon, and this was the only moment where they were really laughing out loud...so I thought it might be worth finalizing the cartoon and publish it.
Posted by T.J. at Thursday, May 10, 2018 No comments: