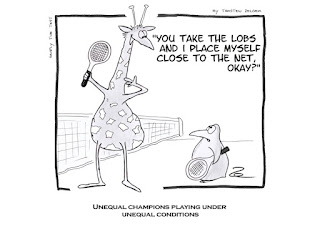 I created this cartoon on behalf of Tennisclub Augst for their regular published small brochure. The more I look at it, the more I realize the interesting analogy it bears to completely different areas far outside of simple Tennis scenarios.
Posted by T.J. at Thursday, February 22, 2018 No comments:

We made it Yogi! I cannot believe that in these days I see 125000 of total and real clicks on my cartoon blog. Not enough to get famous (not my goal) but also not so few to get ignored..., thanX a lot for watching this blog.

I am especially happy having succeeded in banishing all requests to publish advertisment on this blog. I hope I can keep this for yet a long time. 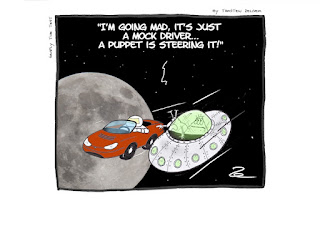 Inspired by Tesla who "uploaded" their first car into space on Febrary 6, 2018. I haven't searched for any Tesla cartoons yet, but I guess there must be hundreds of similar ones around already. By purpose I didn't look for them, so I could fully concentrate on mine and not risk to accidentially copy someone else's idea. The picture of the moon is real and I shot it 2014 with my Russian telescope MTO 1000. 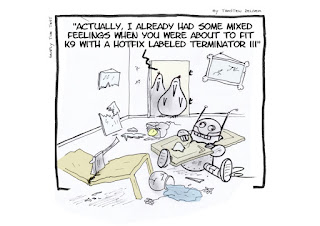 
I never forget the speech of a Google test engineer many years back, when he started with a slide that showed nothing but just all red colors. He took a chair and sat near the audience watching the wall together with us and said nothing. After quite a while he stopped the pondering silence and stated: "one gets used to red colors if you only stare long enough to it". 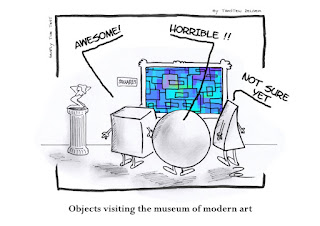 The point he was making here was to never accept your test scripts to report failures for too long. You should immediately address newly introduced bugs and fix those. If you wait too long, more and more tests may go wrong until very soon, you don't get alerted anymore when new tests fail. It may become a normal situation for your tests to fail. This is not only true for automated testing. It applies the same way to manual testing. If you get used to all the flaws and error messages an SUT (software-under-test) reveals, it is just a question of time until you arrange with it.

You don't see these things anymore after a while until someone with fresh eyes points you to all these known but weird things happening on your screen. You may then realize that you may have been reeducated softly. Ask yourself whether you still wear the hat of a customer or have you already turned from a quality focused engineer to an ignorant which - almost in trance - automatically clicks away all the noise. You may explain to yourself that these are all known issues reported in the past and someone will care about sooner or later. Really? Reality shows that these issues are long forgotten; although saved, but in a deep ocean called backlog where none can or wants to touch them anymore. If a bug sits in the backlog for a while, the likelihood for it to die increases. If a bug hasn't been fixed till now, it probably isn't important enough to care about.

Quite some time ago, when I realized that, me too, was just about to get used to quirks, exceptions and error messages, that pop-up like huge bubbles created by a hunting whale, I communicated my perception to the team and it was a shock when I noticed that others seem to have already "fallen in love " with all this puzzle of inconsistency.

As a result I asked myself, do I allow to adopt the attitude of the squares, or am I an ignorant bowl unable to accept things may be seen differently or am I currently just a triangle who struggles to take a decision.  I think I need a therapy... =;O)