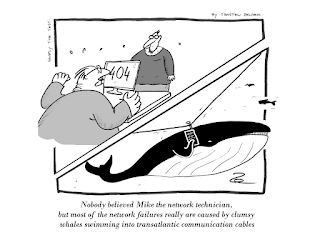 ThanX a lot to Balz Gilgen who handed over to me his draft for this cartoon.
I didn't have to change too much. I took it almost 1:1. Check yourself below.

Further reading on a real whale who got tangled:
https://www.newscientist.com/article/mg23231000-400-hacker-the-humpback-whale-who-got-tangled-in-an-internet-cable/ 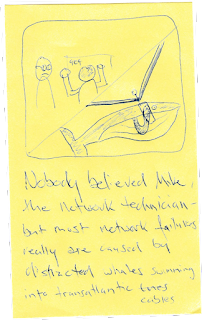 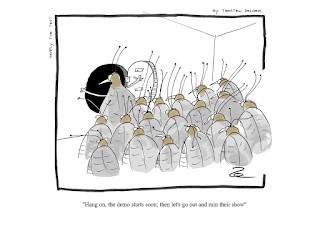 "Hang on, the demo starts soon, then let's go out and ruin their show".

Originally, the text was "wait until the sprint review is over, then let's go out and show up again", but the scene is less funny with the previous text. The current one turns this cartoon into a more common situation, aka. the demo-effect.

The original text  has its root in a real story. Long time ago (not in the company I work right now), the product owner regularly moved all reported defects to a low priority heap shortly before the sprint review, only to put them back into the next sprint right after the review. The goal was to shine with a good product having non-important bugs. With this approach he kept the release manager quiet, because the release manager was looking at high priority bugs only shortly before the review. If there weren't any left, the product owners were out of the line of fire.

It's like in Patriot Games, where the secret armed forces in the desert knew exactly when the spy satellite flied over their hidden military camp. They tided up everything shortly before it reaches their coordinates and then they rebuilt the camp after it had passed (until next time). Result: pin sharp satellite images of unsuspicious cabins in the desert.