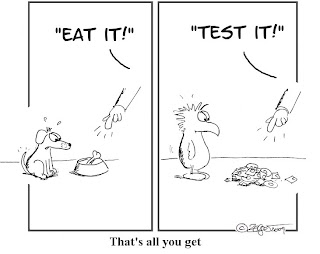 „You are damned if you do, and you are damned if you don‘t“ (Bart Simpson).
That phrase matches perfect to software testers. It doesn't matter how many great and cool bugs you find. If you miss one, you will find yourself in a defensive mode where you have to explain to managers why you missed it. I have rarely seen anyone asking a developer why he introduced that bug and why it took so long to fix it.

Under pressure, we accept that developers make mistakes and create bugs. Surprisingly we roast testers if they miss any, regardless of the circumstances. We are not even asking under which conditions they had to test. Did they have the right information at the right time? Were they given any chance to test at all or was the new version deployed without asking a tester to look at it?


Funny though, I have seen several times people to celebrate developers for fixing bugs they had  introduced themselves. This scenario is especially common if the bug was disturbing for a long time. When someone finally fixes the ugly bug, people leap for joy. They are greatful for simple things that should have worked correctly from the very beginning. 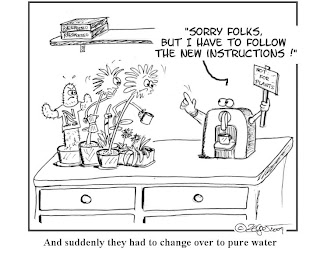 Once a month, the gardeners come into our offices and take care about the tortured plants.
As we all know, plants in IT departments often put up with everything, either they suffer thirst, or near-drowning and they serve as a trash for many weird left-overs.

That is no different in our offices. Programmers and engineers drink so much coffee, especially when it is free, and they like to share it with their plants...until it gets detected...
Posted by T.J. at Friday, December 11, 2009 1 comment: