Behind the Scenes of Chaos Software Ltd. 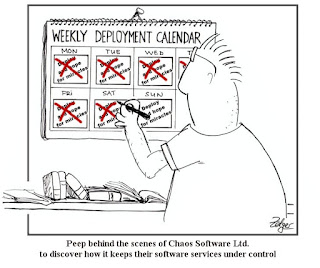 If you are familiar with Gary Larson you might recognize the scene as close related to one of his creature cartoons where the dinosaur stands in front of its calendar striking each day out ("kill something and eat it"). I hope Gary forgives me for the similarities, but the scene fits perfect to our common experience.
Posted by T.J. at Thursday, May 13, 2010 No comments:

IWOMM - It Works on My Machine 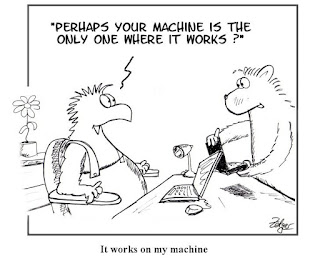 I am sure that any tester has received a message like this at least once in his life as a tester. But to be honest, it happened only rarely to me.
Such a rare incident occured recently when we detected an optimistic lock exception in one of the WebServices under very specific caller scenarios on one of our integration test environment.

However, the developer could not reproduce the error on his workstation and although he was  already running a newer version of the code, he was actually right.

It turned out the problem occurred on a clustered environment only where several containers and nodes are running in parallel. Lesson learnt: It doesn't need to be the programmer who broke a piece of software. Sometimes other influences lead the software to behave different. Here it was the environment in which the software was running.
Posted by T.J. at Wednesday, May 05, 2010 1 comment: