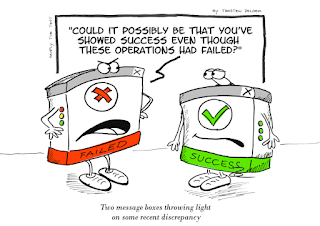 When developers start working on a new feature, they sometimes hard-code things with the intention to replace this part later with dynamic values. Sometimes, these snippets are forgotten, and you are testing features that work with hard-coded results. Success messages aren't excluded from this practice.

Simply said, never trust any success messages. If the program claims it worked, the program may be wrong. The opposite is also true.