It was a bear, for sure (overvalued bugs) 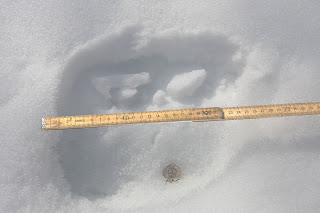 Almost every year we go skiing in the mountains for about a week. We usually rent the same house  which is surrounded by a huge garden. One morning - it's quite a while back now  - we encountered a series of big footprints in the garden.  They were really large. Next to them was a big bloody bone which I assumed to be the mortal remains of a sheep. "What the heck happened here and whose footprints could these be?"

After measuring the size with a scale and analyzing the shape I put a 2-Swiss Frank coin into the track and muttered to myself.."this was clearly a bear".  I must add to this point, until this date, the only tracks I had ever reliably identified were those of a small rabbit. Regardless, everyone agreed, my wife, my kids and my parents in law who were joining us at holiday. It was enough confirmation to take some photos and show them to the local tourist information bureau. She too, was amazed by the photos. She picked the phone and called the forest ranger. While waiting at the counter and watching the officer talking with the ranger, I heard him mentioning a cat. Wait a minute....!

"Are you kidding me?", I protested. "Can you please tell the ranger about my photos and send those to him?", I added mortally offended.

If at all one can mention a cat, then only because these footprints had the size of a mark from a cat's after-lunch nap in the snow. That's for sure.

The ranger promised to check our garden shortly before dawn and let us know. Of course, he never did and so I showed the photos to a local farmer. He confirmed, he had come to the same conclusion as me. He guessed, the ranger as well as the tourist office may both just have been afraid the story and the pictures could make it to the news and scare the tourists.

That's good. Finally an expert who confirms what I've thought from the very beginning. Back home, two weeks later, I assorted my photos and decided to send a few of them directly to the ranger who never visited our holiday house. I was confident, once he sees the pictures, he'll be convinced and confirm my theory.

But, the ranger - who responded promptly - came up with a very interesting new theory. He claimed, it is not likely for the tracks being left by a bear. At the time the bears are usually still hibernating. He stated, these tracks were either left by a wolf or a big dog.

He explained, the huge size of the footprints may be caused by atmospheric conditions that let the footprints grow by at least 50% in size at relatively short time.

To be honest, I'd loved to hear something different , but it was an interesting argument and these statements made at lot more sense than the original comparison to a domestic cat. Of course, I am still not really convinced, but at least I am now at a point where I have to admit, there may be more than just my only one explanation.
How is that story related to testing?

From time to time it happens that we find cool and unexpected bugs that have the potential of being a real big thing; the one killer bug. We might be euphoric and immediately record it and probably all to easy forget to collect more facts before we celebrate the great finding and lable it highest priority. Often, when looking closer to an ugly looking bug and spending more time to understand the impact, the probability of the anomaly to occur in real life and the number of affected users, then what's left may be the sobering that we've just found another low, maybe medium priority bug, but we made a mountain out of a molehill upfront. It's great to find bugs, but be careful with the initial rating without having a second set of eyes looking at it.