Tag submarines before they shoot 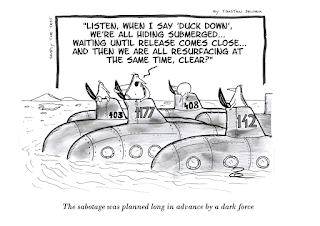 In the retrospective meeting it was claimed we could probably have raised some hot issues earlier. The late addressing of these items put people under pressure shortly before rolling-out. Although it was correct that we had quite some late change requests which hurt not only devs but also testers, most of the issues were not late discoveries but rather late awareness of importance.

The tickets were raised long time back but, because of release pressure, these were parked aside in the backlog and assigned low priority. We called it the “parking-place”. At that time, a restrictive process of prioritizing tickets was needed to manage the deadlines. The limitations were accepted for a while. But over time, things changed.  What was once rated low priority for release N, all of a sudden became more important in the next release and at a bad timing. For many stakeholders including me, these tickets came out of nowhere like submarines; and of course, all at same time.

As a lessons learnt, we - as testers - have decided to get better by regularly reviewing parked tickets. This is to help everyone in the team to become aware earlier of potential new dangerous "submarines" intending to surfac on the water plane soon. There would still be enough time then to tag these before they have a chance to shoot.