He just knew too much 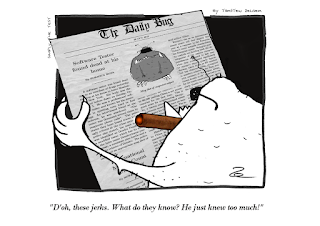 THE DAILY BUG. "A software tester was found dead due to an overdose of drugs yesterday evening at his home in lower Manhattan, New York. His body was discovered before dawn on Sunday, October 5. He was a professional software tester and known for his strategies in spotting even hard to find bugs. An interviewed friend on site believes, he was murdered. "The tester was threatened several times by suspicious phone calls", he said. The police states they have found traces left by ugly critters at the crime scene. The police also stated, the main suspect was identified as Dendro Ponderosa, a modified name which has its roots in the Latin name Dendroctonus ponderosae, a mountain pine beetle and a remote relative of Dendro. The police published an appropriate mug shot of the suspect."
Reported by Formica Rufa
Posted by T.J. at Tuesday, October 08, 2019