Cheerful debugging messages and its consequences 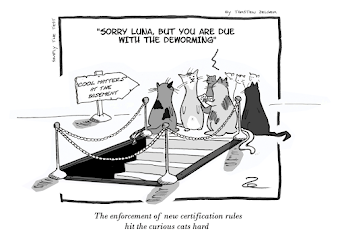 Over a year ago, we tested the automated printing of a clerk’s signature on letters being sent to doctors, lawyers, etc. There were some issues where the signature was missing, that’s why we marked the defective signature-template with a debugging text. The idea was to test whether the template is processed at all or whether the problem is within the signature itself.

I don't know what came over me when I used "meow-meow" as the debugging text. Probably, Luna is to blame for it. Luna was our 16 year old cat which died shortly before. She's now eternalized in this (less testing related) cartoon.

But, about half a year later, the customer reported that he'd seen a letter in the productive document managent system containing the complimentary close "meow-meow" right below the printed signature.

I could feel my face becoming soaked with blood. How the heck could this happen again? Even though we don't execute all regression tests each time we ship a minor release or hotfix, the print-out is part of all smoke tests. Therefore, my thoughts were "this simply can't be true", 'cause we've never seen any such text being printed on any of the letters that ended on our printers.

A little investigation and it became soon clear what happened. Even though we had originally sent the correct template, there was still a copy of the old "meow-meow" template around. When someone decided to include the template into the git-repository, he took the wrong one. As a result, with the next minor software-version shipped, the old signature-template was deployed again.

While this explains how the bug was re-introduced, it does not explain, why testers did not find the issue while testing the print-out.

Further investigation revealed, even though ALL letters processed the "meow-meow" signature-template, NOT all letters were printing the text below the signature. We found out, it depended on several things such as the size of the signature and the configuration of the target letter being sent out. If there was a fixed size between signature and complimentary close, then the text "meow-meow" simply didn't make it in between and wasn't printed. If instead, the letter was configured to dynamically grow with the size of the signature, then also "meow-meow" made it to the printer.

Without going into too much details, only one particular type of letter was affected and fortunately, it was a letter that customers sent only to internal addresses (like an internal email) and not to stakeholders outside the company. Lucky me!

..one of the customers told me that - despite this letter is sent only internally - it may still be used as an enclosure for other letters going out to lawyers and doctors. The company feared they'd lose credibility when such letters made it to their customers. It was therefore important to remove all identified documents in production before they pay a high price for this slip.

What are the lessons learnt?
First of all, it could have been worse. I mean, if you get a letter that ends with "meow-meow", it's likely to put a smile on your face. In my 20 years career as a tester and developer, I've seen comments and debugging texts that are much worse and sometimes below-the line. My friends told me several stories about similar happenings.

A collegue told me, they had added an exhilarant test-text for their ATM. The text was triggered when the card was about to get disabled. When in production - their boss wanted to withdraw money from the machine, the card got blocked and showed the text "You are a bad guy. That's why we take your card away". I only know, he wasn't amused about it.

But, as we have just learnt, it depends on who is affected and who will read it. I can only suggest to never ever type anything like that in any of your tests because you never know where it's going to show up.

Intead of "meow-meow" a simple DOT or DASH would have done the same trick, and didn't raise the same kind of alarm in case such debugging messages make it to the bottom of a letter.

This was the last cartoon and blog entry for 2021. There are more to come next year. Please excuse, this cartoon here wasn't a pure testing related cartoon, but the story still is.
I wish you all a merry XMAS and a happy new year. I hope you enjoy the blog and continue to regularly visit me here.

T.J.
It all started with a Commodore C128 with which I developed a simple ordering software that I used at my first company, a wholesaler of sports goods. It was no rocket science, but it was the trigger for me to slip into the IT Business right after I came back from Swiss Military. I never left IT business since. I scripted DCL (VAX/VMS), REXX (IBM) at a big pharmaceutical company, then studied Computer Science at ISBE (Bern, Switzerland), graduated with BSc and became a C++ software developer while working for a big and well known Swiss banking company. After a short sniff at the consulting world, I discovered the fascinating world of testing and test automation. I started with Rational Robot, then switched to InCisif (a Canadian solution similar to Selenium), SOAPUI and Selenium/C#. Aside all of this, I am drawing cartoons. I am not spending too much time making a cartoon look perfect. I never studied arts or anyting like that. I have a job as a quality manager. That’s where inspiration mainly comes from.